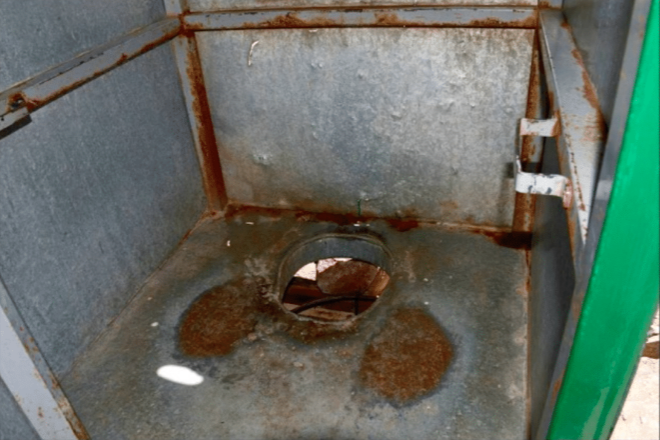 It almost ended there, in a dark cylindrical shaft, not two feet across, and fifteen feet below Earth’s sweeter surface.

Floating in raw sewage, the Kenyan baby boy survived because of a simple misunderstanding of buoyancy. By wrapping him in a plastic bag that miraculously trapped air around his tiny newborn frame, his mother unintentionally saved his life. He had only recently departed one watery milieu inside her womb, attached and warm, nurtured by every maternal heartbeat… safe. Then after sensing warm light and briefly hearing her voice, he was jarred by a sudden splash as he landed in human waste, having been dropped down a pit latrine. He now lay confused and alone in a dark hell, an unforgiving vertical tomb with no relief in sight.

The reason she left him there to die may never be known. Some candles, when lit in storms, blow out quickly before brightening any scene.

At least six hours passed that night from the time the latrine had last been used until another woman came to relieve herself. Getting positioned, she heard distinct whimpers from the damp hole beneath her and began screaming in horror at the thought. Baby cries, a human child in need… how could it have gotten down there, in such a terrible place? A clamorous crowd quickly surrounded the outhouse, at first unable to accept such news from her without coming to a quiet to hear for themselves. Distant pained screams welled up from underneath their feet. A cellphone flashlight confirmed the truth. Someone caught a glimpse of his flesh, a tiny eye peeking out of the foul darkness now wrapped in fearful suspense.

A man of uncommon bravery stepped forward and volunteered to attempt a rescue. Someone found a rope and quickly tied a butcher’s hook to the end. He leaned in headfirst as far as he could, fighting the rush of blood to his head, uncertain darkness, and sewer gas. With his ankles supported to prevent him from plummeting further into the pit, shoulders scratching against earthen walls on either side, he strained to see.  “Pole, pole! (Slowly!)”, he yelled as the infant came into focus. Within seconds, he managed to snag the shopping bag by its handles with the butcher’s hook.

Angels must have celebrated the moment, as an unwanted baby boy was cradled by his hero and brought skyward, to thrive in the hopeful light of day again. There could have been no worse odds against being rescued, and all the more when he was so utterly helpless and weak. Parallels exist for we who also once lay dirtied, unable to save ourselves, and who were suddenly plucked and brought up to live in the brightest place, full of wonder and solidity. Only God does such things – sends saviors into bleakest night to rescue the dying.

His first name, given by the hospital in Narok, was Abandoned. Within a half hour of hearing about this boy, I knew that he was to be called David. Later, we looked up the name and discovered that it meant “beloved”, confirming that this was to be the handle that defined his new identity. 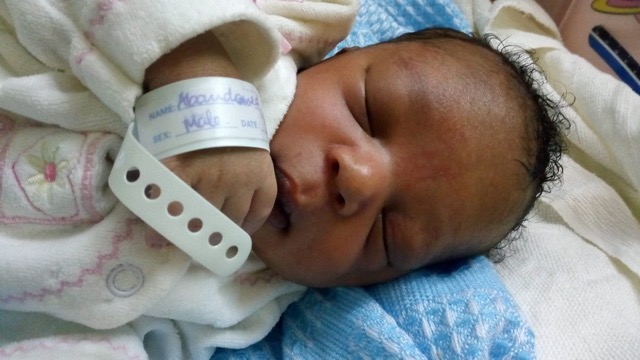 Twenty-one days passed, marked by prayers and worries, as he lay in a hospital bassinet undergoing treatment. And then he finally came home one sunny Wednesday, as sure as the happy ending of a perfect play.

The NV gates opened and we smiled and cheered until our faces hurt. We sang and danced and passed him around before sharing his celebration cake. We remembered our own stories and what it felt like to be clean again, to start over with a forever-fresh slate in a crowd of the redeemed. 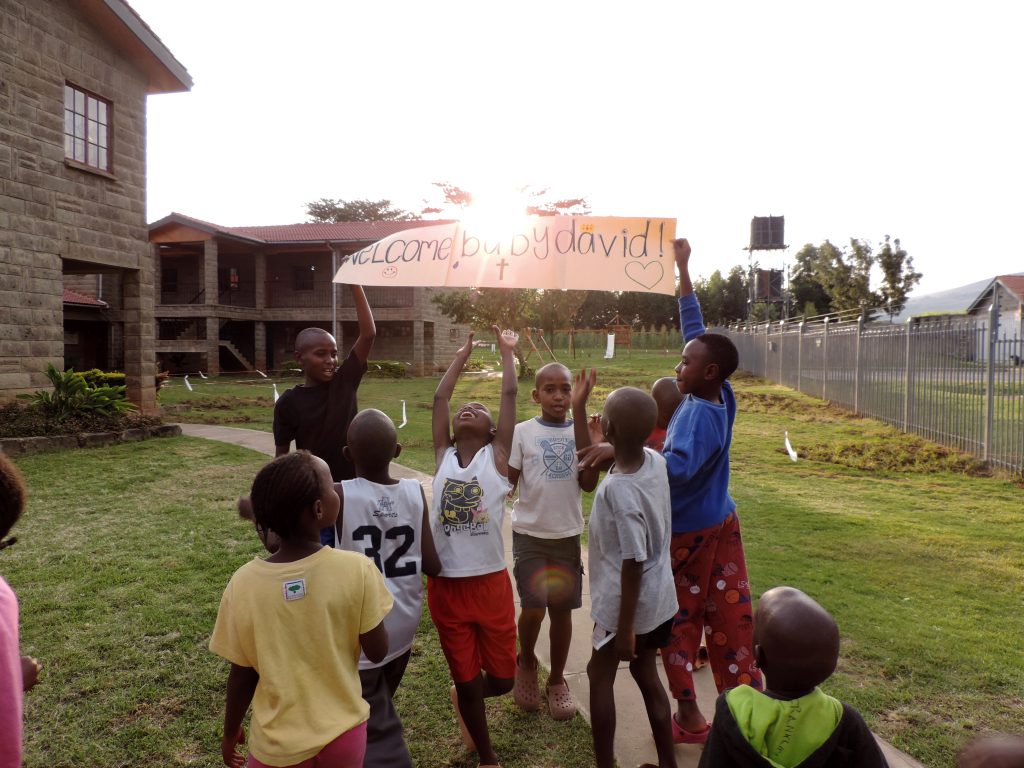 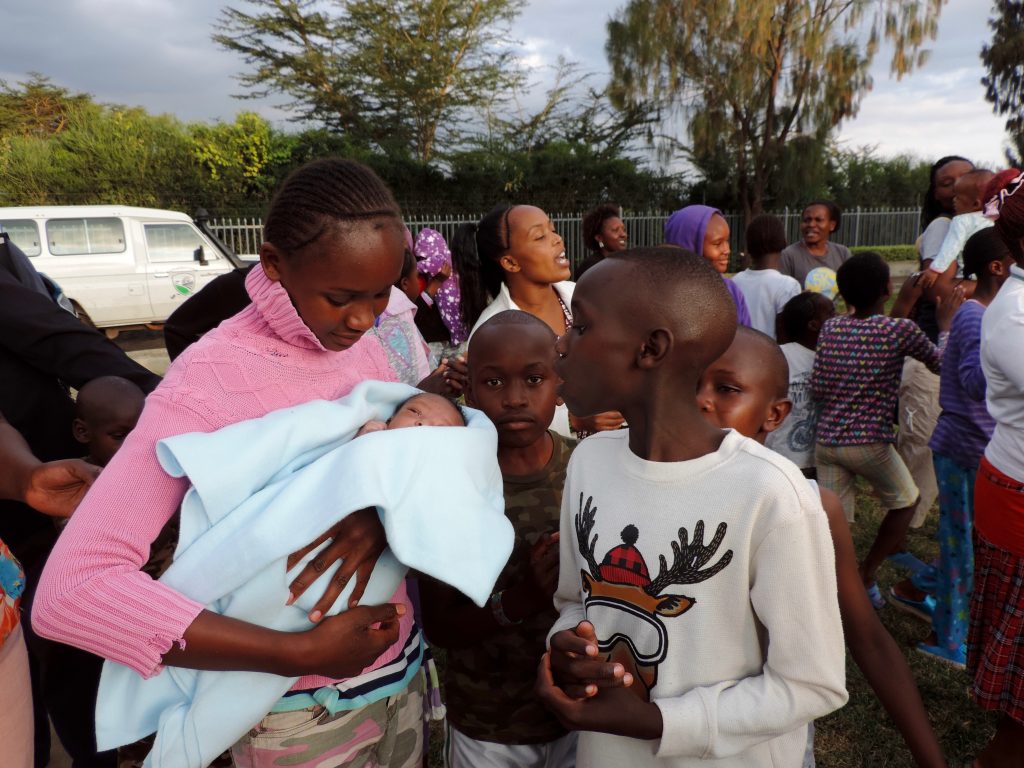 We worshipped God, who finds the hopeless in deep narrow pits of despair and brings them home to live in wide-open places, full of love and song and purpose. And we did so, aware that even the best of these places is shadowy at times, unable to compare to the home that awaits us on that Day, farther up and brighter still. 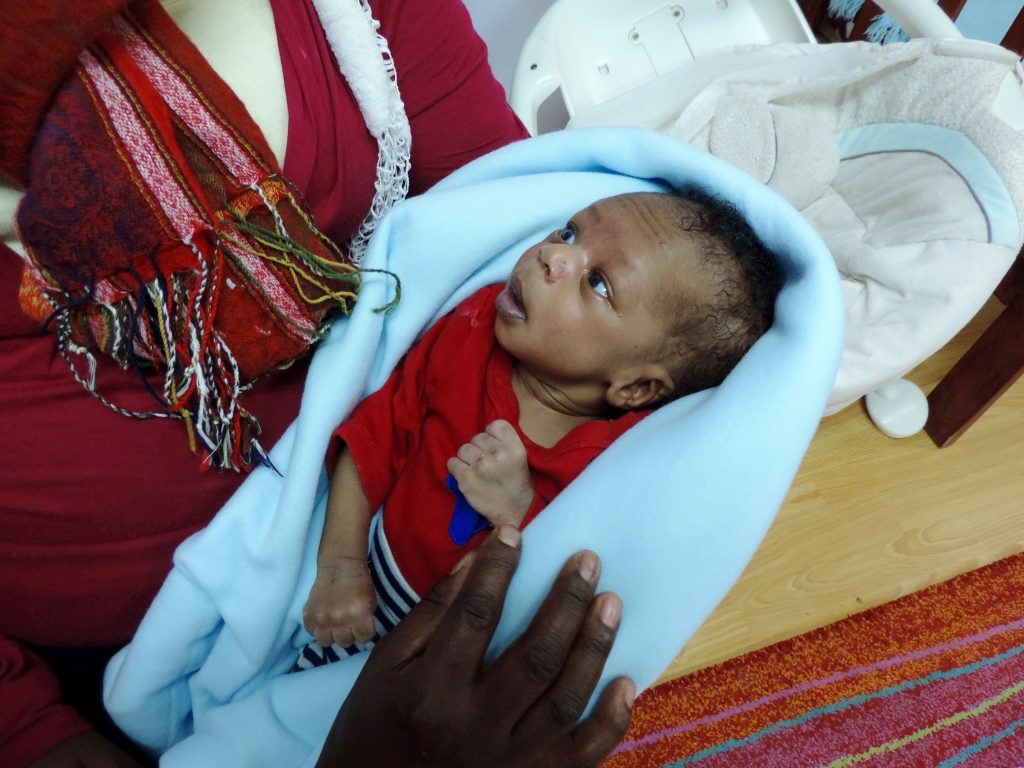 Life and color, loving touch, early literacy, healthy attachment, nutrition, and the riches of a giant worldwide family will fill David’s future. For the next two years our baby moms will give him their expert attention, caring for every aspect of his babyhood. There will be those glorious toddler years to follow, bounding around the hallways of Naomi’s Village, singing in the dining hall, heading to the beach every December, and opening Christmas gifts with his siblings. He will begin at Cornerstone Preparatory Academy in 5 years, and we will put a solid stone under every one of his dream steps.

And perhaps one day, by the grace of God, this beloved boy will stand tall and tell his story to thousands. If so, it will be one that is too awful and too beautiful to be true at the same time, a vivid echo and a reminder of the greatest story ever told.

← Anecdotes and Reflections: The Rift Valley Pandemic Grace in the Hardest of Years →